Yeah, well, OK...this title is a bit different from the last few.

A couple of young friends of mine have recently discovered Pink Floyd, after I passed on to them a copy of the 8 bit version of Dark Side Of The Moon. They got the original, on vinyl, and are loving it. I've wondered about suggesting Wish You Were Here. Many musicophiles like myself...of a certain age...consider this the only Floyd album worth hearing. The Syd Barrett albums are charming, but hardly great music. 'Moon' is perfect, of course, but maybe too perfect. A little too polished. The late 70s albums are dull as pig shit and after that it all went a bit downhill. In the middle of that early phase is the crazy diamond that is this glorious album. The only record they did with soul. If you haven't heard it, do check it out. 1975 was quite a year for music, with many of the credible acts of the late 60s and early 70s reaching their maturity before the long slide to the tastelessness of the 80s. Isn't it amazing how some musicians can get a lifetime of fame and cash on the strength of just one great record. That's show business!

That's my rant of the month.

No EMFMAB, but I do have an episode of my reggae show 'Dandelion Roots' airing on Dandelion Radio this month. Go there for daily show times. Here for more details.

Can I share with you my musical pick of the month?
Can you handle French rap?
This album grabbed me from the first bar:
Kaleed - Un Jerrikane de plus - Chainsaw Attitude Volume 2
on the netlabel Audioactivity.

The photograph of 2 Green Woodpeckers on a telegraph pole opposite our house was taken last week by my wife Sarah. We get a lot of birds around us.
A bird story follows:
A Kestrel flew in the house a couple of weeks ago. It went for a kill on the sill and tumbled through the open window, along with the bird it was after! I was sitting a few feet away. It quickly came 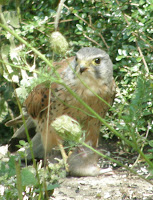 to it's senses and flew towards another window that was closed, banging itself repeatedly, and loudly against the glass. It was only at that point I realised what it was and what had happened. We have small birds coming in fairly often. They tend to freak out a bit, then calm down, look around and head straight for the open window they came in through. They're not stupid. A Kestrel, if you don't know, is a small British bird of prey. (This photo may be the same individual, but we cannot be sure. It was taken in the garden 3 years ago. We have at least one local pair. This male bird has an ex-rat in it's talons.) I say small, but that's just relative to others of it's kind. It's a pretty big and fierce bird to have freaking out less than 10 feet away, I can tell you! I wasn't truly scared that harm could come to either of us, 'cos I knew it was just frightened. Anyway, it did calm down after a minute (That's a long time to a bird. They perceive about 10 times faster than us.) I called Sarah in from another room, and she arrived in time to see the bird get it's bearings and fly straight out the way it came in. It was a couple of minutes before the Blue Tit that had been its 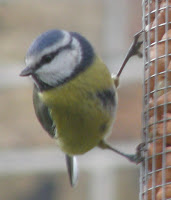 intended meal emerged from a corner of the room where it had been hiding...doing that phasing out thing that they do where you can look straight at them and not see them. It was a bit shocked.They can go very passive when frightened....linked to the aforementioned invisibility in some way, I'm sure...so this one needed Sarah's help to get out. She has boundless compassion for small creatures. (The Tit in the photo is almost certainly not the same individual, but is probably from the same family.) Everyone survived the experience, that time, but a Kestrel must eat to live. Consider all the insects that Great Tit would have eaten in it's life that would have been saved if the Kestrel had been successful. Do not all entities have an equal right to life? Thaddeus Golas said something astute about this in his 'Lazy Man's Guide To Enlightenment'; "There is no important difference between live and dead matter, since both are made up of live entities." Listen here.

shine on
Peter
Posted by Peter Nelson at 07:44